Regardless of where the recipe originated, Circassian chicken is a thick sauced chicken dish made with nuts and spices, and typically served over rice. I decided to make this dish two weeks ago and in my haste made the mistake of adding 1 tsp. of Cayenne pepper, instead of ¼ tsp. As you can imagine this mistake was very spicy. After choking down a plate with rice and about a litre of milk, I placed the leftovers in the refrigerator determined not to let the food go to waste.
The following day I was struck by what I liked to think was a touch of brilliance, but in reality was me using the odds and ends of various foods I had around the house. This attempt to clean house, though, was one of those rare occasions when the scraps made the meal. I decided to make a grilled sandwich in the following manner:

A few pieces of salad greens (I like a mix of spinach, Lollo rossa, mizuna, and romaine, a mélange my grocery store calls “San Marino Mix”)

How It’s Done:
1.) butter the outer surfaces of the bread
2.) add the Circassian chicken, sour cream, greens, and cheese on the bun and then fold fold closed to make it sandwich shaped.
3.) cook the sandwich in a frying pan for ~5–7 mins., flipping half way through so that both sides are golden and crispy, allowing the cheese to melt fully and solidify the other ingredients in place.

I like to eat this sandwich with some potato chips on the side, or beet-walnut-prune salad. Whatever floats your boat. The addition of greens and dairy give the sandwich a good crunch and cut the heat of the Cayenne pepper, while still allowing the sandwich to be deliciously spicy. I hope you enjoy this sandwich as much as I did.

You know, before I go, it’s a funny fact I heard the other day, some someone was telling me the story behind the origin of the name “Mississippi,” something ‘bout “same as Saskatchewan, both named for Squatchs,” or some such something as that. I might have gotten it slightly confused though. In any case, onwards,

Huck
Posted by Unknown at 10:09 PM No comments:

HEY RUBE!!!
The call of the circus melee, where sledgehammer handles and quick fists provided the safe guard against would be circus ruffians and rogues, often gathering the ire of the locals, official and otherwise. And what doesn't calm the nerves after a brawl like a good slice of vinegar pie, wait…VINEGAR PIE!?!

Vinegar pie, the thought does not sound very appetizing nor the notion of its history very clear. I stumbled across this pie while reading Bert Chipman’s Hey Rube, an anthology of circus stories, mostly about circus fights and crazy business, published in 1933. The book discusses the close place that pies of all sorts hold in the hearts of circus persons, apparently being preferred ala mode, noting that “down south we had sweet potatoe pie, New England had its huckleberry pie, while in Canada we ran across vinegar pie.” (p. 30). I was instantly intrigued and had to know what vinegar pie was and how I could acquire some. 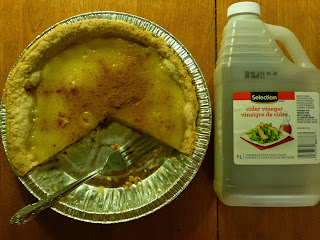 To my understanding, based admittedly on limited internet research, vinegar pie is a pie of tight times, a pie of the depression and any sort of recession that calls for the money belt to be tightened. It is also, to my knowledge and assumption, a pie of long winters and harsh environments, when fresh fruits, like apples, and exotic citruses, like lemons, were either not available or were overly expensive.  The pie is a custard style pie. In essence the vinegar in vinegar pie, being cider vinegar, is the fruit substitute providing a tart almost mulled apple cider flavour.  Lemon zest can also be used to substitute for lemons to make a lemon style pie, using cider vinegar in combination with lemon zest instead of the entire lemon.

I sought out and read a number of recipes, ultimately settling on Jessica Webster’s (<---click this for the original recipe) delicious recipe from The Ann Arbor News. This pie was simple, subtle, and easy to make (I am by no means an expert baker...or an amateur baker…or a baker...), with cinnamon being the only additional spice. There were other, fancier, recipes as well that called for fresh ginger and nutmeg etc… These recipes sound great as well, and I may try them in the future, but they were far more involved and to my mind somewhat undermined the original notion of this pie being a scrappy hard times pie, where limited supplies and money were what had to be made due with.

The pie worked out very well and was surprisingly tasty, so tasty I ate two pieces right out of the gate! I even managed to convince my family and friends to try the pie. They were all pleasantly surprised with how tasty the pie was (which is probably more of an endorsement than my own odd tastes). I would highly recommend making this pie and would love to see it make a triumphant return to diners and delicatessens all over. Kudos on the recipe innovation Jessica Webster, it truly is better than it sounds, and is easy for anyone to make.

Posted by Unknown at 9:46 AM No comments:

Pork tongue, well tongue in general, is such a diverse meat to cook with, it has an almost fatty succulent greasy taste to it that is somewhat hard to describe. You can prepare tongue like a classic roast with bay leaves and cloves or you can work tongue into a meatloaf or curry, as I have below, it is so versatile. I hope you will try this recipe and let us fella's here at the Huckleberry Hog know what you thought, what you liked/disliked, etc... Do enjoy.

Making It:
1.) place the tongue in a pot large enough to hold it comfortably. Fill the pot with water until the tongue is completely covered. Add 1 tsp. of salt to the pot. Bring to a boil and then reduce to a medium boil for ~1hr., or until the tongue is fork tender. You can let the tongue boil while you make the curry sauce so that it is hot when you add it to the sauce.

3.) place the puree in a deep frying pan and heat slowly to warm the mixture. Add the coconut milk to the puree and stir thoroughly to combine the elements into a consistent sauce. Once the sauce is to the consistency you desire add the lemongrass pieces, almonds, carrots, and potato. Allow this mixture to low simmer for ~40 minutes. At the 30 min. point add the kaffir lime leaves and continue simmering. If the sauce gets to thick you can add a little water and simmer to reduce until the vegetables are desirably soft.

4.)  Once the tongue is tender remove from the water and peel the coarse outer layer off, removing any tough bits as necessary. The whole tongue is edible. If you wanted to, you could leave the outer layer on, though this layer can be tough and oddly textured. Slice the tongue very thinly against the grain and add the pieces to the simmering pot of curry to further tenderize and take on the flavour.

7.) Before serving, remove the lemongrass segments and kaffir lime leaves. Serve the curry over rice. I like to serve it with naan or some other bread, whatever you prefer.
Posted by Unknown at 10:22 PM No comments:

In my ongoing journey to explore the possibilities of cooking with the unreasonably unmentionables I have provided here today a soup I rather enjoyed devising. Having recently read the inspiringly written no-nonsense work Charcuterie and French Pork Cookery by Jane Grigson, this soup is a play on the more traditional split pea and ham soup. Instead of ham I have crafted this soup with pig's ear, giving it a lot more crunch and a more subtle pork flavour to warm ye' winter bones.

*chilli oil can be obtained from many grocery and specialty stores, or it can be improvised at home by adding olive oil to chili flakes in a jar, agitating, and allowing this mixture to stand overnight to develop in heat.

The Method:
1.) Using a razor or sharp knife remove any remaining hairs from the pig’s ear. The hairs may also be singed with a lighter and then scrapped off with a razor/knife. Wash any blood clots, abnormalities, and waxy substance off the ears, cleaning thoroughly.
2.) Place the cleaned ear in a medium pot with salted water high enough to cover the ear. Simmer for 1.5-2 hours, until the ear is tender but the skin is not pulling away from the cartilage.
3.) Place the ear on a flat tray and cover with tinfoil. Place a cutting board on top of the wrapped ear and place a weight on top of the board and let stand for 30 mins. or longer. This will flatten the ear, making it more manageable to prepare.
4.) While the ear is resting place 3 cups of water in a medium soup pot, adding salt to preference. In this pot place the diced carrot, celery, and split peas. In a frying pan, fry the garlic and onion in olive oil until the onion is soft and translucent (~3 mins). Add the fried onion and garlic to the soup pot. Bring the pot to a boil and then reduce to a slow simmer and simmer for ~1.5 hrs, or until the split peas are tender.
5.) Towards to 1.5 hrs mark, remove the pig’s ear and dice finely. Fry the diced pig ear pieces in chilli oil for ~1 mins, watching that the gelatinous skin does not stick to the frying pan. Once fried add the diced ear to the soup to cook for the last 5-10 minutes before serving.
6.) Once the soup is cooked you can add diced cilantro to preference to give the dish its finishing touch. It is your choice as to when the cilantro is added. If you like the crisp feel of fresh cilantro add it at the very end as more of a garnish. If you prefer the cilantro flavor to subtly permeate the soup but remain a background in terms of taste and texture, you can add it early and allow it to simmer in the pot with the soup.
7.) Once the soup is done serve immediately with saltine crackers and black pepper to preference.

Variations:
If you prefer a soup with finer consistency this soup can also be blended before the addition of the pig’s ear. Simply follow the steps and at the end of Step 4 blend the soup, either with an immersion blender or by transferring the soup in workable batches to a standard blender. You can blend the soup entirely or you can blend a portion of the soup and then add the blended portion to the remaining soup to create a chunky pureed soup to which the fried pig’s ear can then be added.

Commentary:
This pig’s ear soup is great on a winter’s day. The addition of the diced and chilli oil fried pig’s ear provides a more subtle pork taste to the dish while also adding a textural element in the crunch of the cartilage. By slicing the ear thin and frying it in chilli oil you allow for the addition of a layer of heat but not so much as to be overwhelming, warming the body but not burning the mouth.
Posted by Unknown at 2:48 PM No comments: